Kalevipoeg’s Home is located along the Culture Road (Kultuuritee) while also marking the beginning of the Onion Route. In Kääpa, you will find Kalevipoeg’s Museum, adventure park and playground inspired by the Estonian epic “Kalevipoeg” (the son of Kalev). In Estonian folklore, Kalevipoeg is a mythical giant and a hero whose endeavours have generated numerous local mounds, lakes, bogs, springs, boulders and more. The stories of Kalevipoeg are characteristic of the landscape in Jõgeva County that is rich in drumlins; therefore, there are many sites associated with him also around Kääpa. For instance, the ancient hillforts in the area are known as Kalevipoeg’s beds. These were the places that the author of “Kalevipoeg” Fr. R. Kreutzwald had in mind when describing the sites, as the hero laid down to rest after carrying a load of planks through Lake Peipus and fighting his enemies.

According to the tales, Kalevipoeg’s huge sword is resting in River Kääpa. There once was a landlord who wanted to get the sword and harnessed 6, 8 or even 12 spans of oxen to pull it out of the river. Due to supernatural intervention, the effort was never completed and so, in good weather, you can see the golden sword shining in the river to this day. There are various stories about how the sword got into the river. Some believe that Kalevipoeg, exhausted from battle, bowed his head to drink from the river and his enemies killed him – the hero’s sword fell into the river, while his body created burial mounds nearby. In Kreutzwald’s version, the sword was dropped into the river by the warlock of Peipus who had stolen it from Kalevipoeg. The cursed sword eventually became the end of Kalevipoeg when he lost his legs wading through River Kääpa (Kääpa literally meaning the “burial mound”).

Kalevipoeg’s Museum introduces the epic of Fr. R. Kreutzwald as an important text of Estonian national culture. Similarly to the national epic, museum’s exposition is highly multifaceted, skilfully combining the Estonian folklore and the individual talent of the epic’s compiler. The adventure park allows you to test your skills on the high trail “Lennuk” (the name of Kalevipoeg’s ship) as well as on the low trail “Tracing Kalevipoeg’s Path”, both inspired by the stories of the national epic – you can go on a journey to the end of the world and come back again while practising teamwork and testing your faith in yourself. In the playground, visitors can compare themselves with the giant hero and get new knowledge about the epic in a playful form. 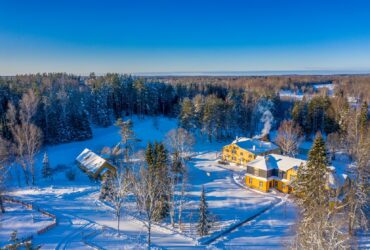 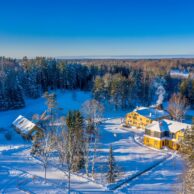 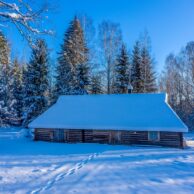