Tartu – the Capital of southern Estonia

You have reached the second largest city in Estonia. Once an important Hanseatic City, Tartu developed into a gateway to South Estonia. Over the ages, Tartu has been the spiritual capital of Estonia – the city of good thoughts. Estonian theatre and the Republic were born here; the song festival tradition had its beginnings in Tartu. During the national awakening period, Tartu was known as the Athens of the Emajõgi River. It is not possible to discover Southern Estonia’s beauty without passing through Tartu.

Tartu is a city of science. Here is one of the oldest universities in Europe, the University of Tartu, which was built in 1632. The university has given us several internationally recognized scientists and scholars. Thanks to the student community, Tartu has a healthy mix of youthful joie de vivre and academic traditions.

Youthfulness and a bustling intellectual life make Tartu a place where life never stops. Year-round cultural events offer entertainment for people of all ages, including theatre performances, concerts, fairs, and other exciting events. While enjoying the cultural life and city bustle, it is almost guaranteed that you will also encounter the unique Tartu Spirit.

Right here on the Town Hall Square, the Statue of the Kissing Students welcomes everyone. The legend of its creation tells of two students in love, who walked along the dark streets of the Old City in autumn. Laughing and kissing, they reached the Town Hall. It started raining, so the young man opened his umbrella and gave the girl a hug. They enjoyed a long kiss. Their love reached the heaven, and as the girl wished that this moment would never end, a blue arrow from the sky caught them and the couple turned to stone. From this time onwards they have been standing on the Town Hall Square and moving the hearts of passers-by to love and their lips to kiss.

Each time it rains, a little red heart falls down from the umbrella. These hearts remind us of this beautiful love story. If you stop at the right moment, the little heart may land right by your feet. 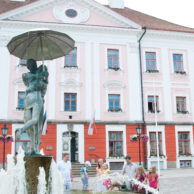 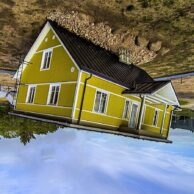 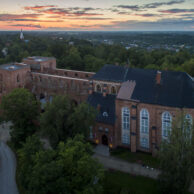 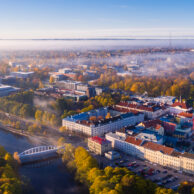 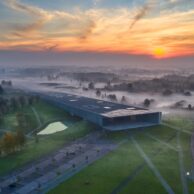