Lake Saadjärv, one of the most distinctive and interesting lakes in Estonia, and the largest in Vooremaa. The lake is 6 kilometres long and up to 1.8 kilometres wide, covering an area of 707.6 hectares.

Lake Saadjärv is also popular in folklore. Five of Kalevipoeg’s sling stones are in the area, three of which are visible. According to folklore, when our national hero walked through the lake, the water only came up to the laces of his leather shoes, or pastlad. Stories tell about Saadjärv going on a trip, and a church at the bottom of the lake.

In olden times, Saadjärv is said to have been located in Vara parish, in the Jõusa farm bog near the Sookalduse hills. It is said that it was there for a long time, but at one point it changed its location.

One day, on a Sunday morning in heavy winds and storms, the lake simply became airborne. As it moved, something fell, and the lake shouted, “A leg came loose!” Later, people found a large stone in the lands of Polli farm, and the stone was believed to have fallen from the lake. The stone is still there, and people have continued to visit the area to see the stone with their own eyes up to the present day. Saadjärv is said to have settled straight on a church, which was located where the lake is now. It was time for the morning service, and the church was packed with people. Even now, in clear weather and calm waters, the church spire can be seen at the bottom of the lake. 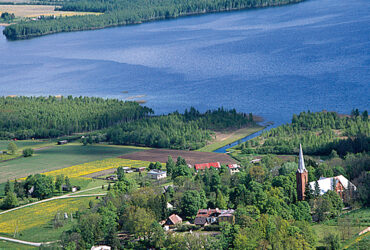