The first mention of the manor dates back to 1582. In the 16th and 17th centuries the manor was owned by the von Dücker, Bronsky and von Fersen families. After the Great Northern War, the manor belonged to the von Rennenkampff, von Samson and von Rosen families. When the von Bruiningk noble family purchased the manor at an auction in 1818, it commissioned extensive construction work at the site. The manor was then owned by the von Renteln family until state takeover in 1919.

This impressive wooden mansion, built in several stages in the second half of the 19th century, is situated in a park that was created at the same time. Constructed simultaneously with the two-storey wings of the manor, the romantic watchtower and the conservatory adjacent to the left wing were unfortunately demolished in the 1930s. Besides the manor, the following structures remain as a part of the historical manor complex today: a granary, a distillery, a two-level drying chamber made from cobblestone and an octagonal aviary.

In 1933 Palupera School moved into the mansion and still operates there now. 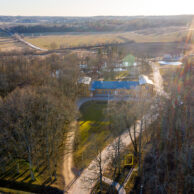 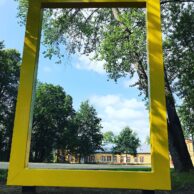